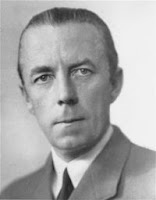 98. Count Bernadotte.
Israeli Zionists quite falsely maintain that United Nation partition Resolution 181 was accepted by them and not by the Arab nations, which therefore gave them the alleged 'legal' grounds for the existence of the State of Israel. I have already deliberated on this half truth in previous posts (26 and 41). What apologists for Israel's illegal existence forget to mention however, is that the United Nations made its recognition of Israel specifically contingent on Israel's compliance with Resolution 194. However Israel cheated by first agreeing, but then reneged 24 hours after its U.N. admission was formalized in U.N. General Assemblence Resolution273. Sixty three years later it had yet to comply and refugees watched from the squalor and humiliation as Israel flaunted the International body that created it, but consistently flouted and ignored international law and U.N resolutions continuing unabatedly its aggression and ethnic cleansing.

United Nation Resolution 194 (December 1948) to be sure, demanded that Israel stop blocking the return of the 750,000 people it had just violently expelled from their land and villages; that Palestinians be accorded free access to Jerusalem, which was to have been an international zone (UNGA Res. 303 'Corpus Separatum'), but whose western half Israel had seized; and 'final settlement of all questions. Even though Israel had grabbed half of the 43 % of Palestine that Resolution 181 had reserved for Palestinians, claiming about 78 % of the land instead of the 55 % it would not (and to-day) will still not commit to any geographical boundaries !  The war of 1948 was a too late offensive by Arab armies fought principally inside the 43 % of land allocated to the Palestinians by the partition resolution to protect its indigenous inhabitants from expulsion and annihilation bu the Zionist terrorist campaign.

Count Bernadotte, the Swedish diplomat who during W.W. 2 had secured the release of 30,000 Jews from German death camps, told Zionist leaders that their theft of land beyond the U.N. partition agreements and massacres of Palestinians had to stop, he was assassinated by members of the Stern Gang.  A U.N. Security cablegram he had sent from Palestine just before he was killed in September 1948 describes the Zionists as:
"terrorist groups....in territory controlled by the provisional government of Israel (and that) had operated in Palestine during the mandate, and were responsible for the many hideous crimes committed in name of political objectives...(they) constitute a critical challenge from an unbridled bank of Jewish terrorists to the very effort of the United Nations to achieve, by means of mediation, a peaceful adjustment of the dispute in Palestine". 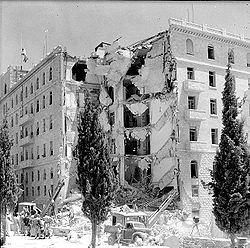 Ruins of the King David Hotel

P.S. Zionists most notorious terrorist groups were the Haganah, Stern Gang, Irgun (as well as a number of smaller splinter groups), later amalgamated into the IDF (Israel Defence Force). They already operated and terrorised the Palestinian population long before Israel was created in May 1948.   In July 1946 the Irgun and Haganah terrorists blew up the King David Hotel in Jerusalem killing 91 civilians and injuring 46.


Posted by CONTRAVIEWS NEW ZEALAND at 6:43 PM No comments: 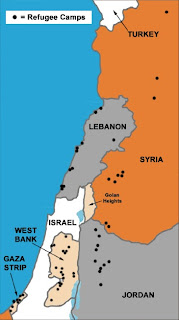 97) The Right of Return is embodied in United Nation Resolutions 194 and 242 as well as in the Fourth Geneva Convention of 12/8/1949
Nine million stateless Palestinians are currently living in inhuman conditions in huge camps all over the Middle East.
A Palestinian refugee campaign is being planned aiming to harness the winds of change in the Middle East and mobilize the diaspora into action. It is expected that one million people will participate in a global sit-in at Israeli embassies world wide.
Posted by CONTRAVIEWS NEW ZEALAND at 5:27 PM