153 NEO NAZI PARADES IN THE UKRAINE 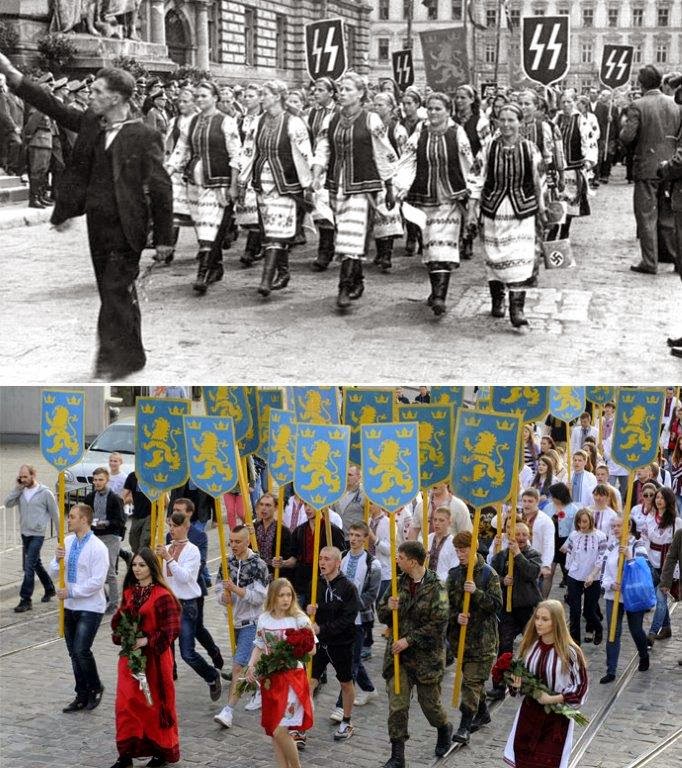 Ukranian  Nazi colaborators in the west of the Ukraine at a parade of the 14th Volunteer Division of the Waffen SS on the 28th April 1943.
Neo Nazis of the current self appointed Kiev regime celebrating the 71st anniversary of the same event on the 27th April 2014.
Posted by CONTRAVIEWS NEW ZEALAND at 7:40 PM

152 LETTERS TO THE CHRISTCHURCH PRESS

Following are some recent letters that were submitted to the Christchurch Press with regards the Ukrainian turmoil. Some were published, some not.

20/03/2014
The front page articles in 'World'  (20/3) leave no doubt how deeply involved this paper s in the western disinformation and demonization campaigns as so aptly portrayed by your cartoonist a few days ago, in order to instil in the minds of the general public a completely distorted picture of what is really going on in the Ukraine to-day. In 2010 western powers recognized the legitimately elected Ukrainian government of  Yanokovitch , who was ousted in a violent covert coup by ultra right fascists and neo Nazis with the full support of the US and NATO. They were these with balaclavas masked thugs who were creating the mayhem, shooting at unarmed police, throwing Molotov cocktails and ransacking government buildings. These facts were recorded on several YouTube recordings but consistently ignored by the western mainstream corporate media. How can such an unelected Ukrainian regime be regarded as legitimate? Compare this with the peaceful referendum, supported by the overwhelming majority of the Crimean population. Remember Kosovo seceded from Serbia and the Falkland islands remained British following referendums. Scotland  at present is now planning to secede from Britain.

26/03/2014
As part of the disinformation war of our corporate media we can  of course expect a fair bit of "Russia bashing", a left-over from the Cold War and which hitherto has remained almost completely unchallenged. The same happened during the Iraq war and the majority of the general public as usually swallowed the propaganda lock stock and barrel. However it is fair to say that most people have now realized that, at the time they had been taken for a ride.  But there was one significant difference between then and now. During the Iraq, Vietnam and other wars the news media were inundated with letters from their readers and there were often heated debates in the letter columns. Those discussions may have contributed to making people more aware and more critical of how insidious propaganda is. But sadly enough not these days. The confrontation between the two super powers has lead us to a far more dangerous confrontation then ever before, which might easily ignite a nuclear conflagration.. That should be an important reason for allowing the public to have their say in matters of life and death, matters that will ultimately effect their own , their children and future generations lives. Many concerned people to-day are better informed because they have turned to alternative, independent news outlets that also stimulate interesting and informative debates via the internet. The letter pages of our printed press and TV outlets, remain conspicuous for their silence and absence of any meaningful debate, leaving corporate mainstream propaganda unchallenged and unopposed.

28/02/2014  (Published)
HISTORTICAL FACTS
With great interest I have read Chris Trotter's fair and well balanced article ('Press' Feb 25) on the current political unrest in the Ukraine. Perhaps The Press will allow me to add some historical facts important to understand why the anti-government riots were mainly situated in the western part of the country. During the past centuries large numbers of people from central Europe migrated to the vast thinly populated expanses of the then Russian empire. When the Germans invaded Russia in June 1941 they were initially welcomed with flowers by their descendants, the majority of whom were of German origin. However,  after they discovered what their "liberators" were up to, and apart from a very small number of traitors who enlisted in the German army, Ukrainians joined the Partisans, the fearless Russian resistance. Russia lost 20 million people during World War II. So the upshot is that in the western Ukraine there has always been a small core of fanatics, easily manipulated from  the outside, striving to break away from Moscow. How this will play out in the month to come remains to be seen. Allow me to mention that the Ukraine has had two elections both presidential and parliamentary and was given a clean bill of health both from the EU and Washington.

10 April 2014 (published)
An article (April 8) dealing with the unrest in the eastern parts of the Ukraine stated that the Russian Government had "branded" the Kiev regime as illegitimate. Of course that is very true and hence gave legitimacy to the Crimean referendum and any future referendum that may follow. The Crimean referendum was conducted in a very peaceful manner. No shots were fired, no people were killed. Compare this with the violent overthrow of the previous legitimate elected Ukrainian government of Yanokovitch during an extremely violent coup d'état, illegal in accordance to international law. Yanokovitch might have been corrupt, that happens more often in our world to-day and is nothing new, but he would most likely have been removed, or impeached in the next election to be held in December of this year. According to a telephone conversation between the Estonian Minister of Foreign Affairs, who happened to be in Kiev at the time and Catherina Ashton of the European Union, the Estonian Foreign Minister revealed that the killings of both protesters and police in Kiev was orchestrated by elements belonging to groups of fascists and neo-Nazis and should be investigated. The present Kiev regime however, is refusing to co-operate. The conversation is recorded on YouTube and can be watched on (contraviewing.blogspot.com) The Estonian Foreign Affairs Ministry confirmed that the recoding is authentic.

28 April 2014 (published 'in a few words')
A dark stain was cast on this years Anzac Day. Seventy years ago we fought fascism and Nazism. To-day we are supporting fascists and  neo-Nazis in Ukraine. I am sure that those who paid the ultimate price with their lives during WW II are turning in their graves.