THE MYTH OF THE JEWISH "RACE" 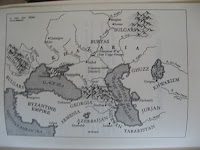 72. A) Scarcely any scholar has contradicted the assertion that there was no forced exile of a Jewish people in the first century ad. and most critics are perfectly well aware that the Bible is not a book of history. The secularisation of the Old Testament was conducted by the Zionist regime in parallel with the nationalization of the "exile". The myth that recounted the expulsion of the "Jewish people" by the Romans became the supreme justification for claiming historical rights over a Palestine that Zionist rhetoric had transformed into the "Land of Israel". We have here a particular astonishing example of the molding of a collective memory. But what happened to the population of Judea if it did not undergo exile by the Romans ? In the early days of colonization even prominent Zionist leaders, including Ben Gurion all believed that the native Palestinians ("fellahs") they encountered were descendants from the ancient Jewish people, and that the two populations had to be reunited. They knew perfectly well that there was never an exile in the first century ad., and they logically concluded that the great mass of the Jews had converted to Islam with the arrival of Arab forces in the early seventh century. It is most likely that to-days Palestinians derive from a variety of origins, just like all contemporary peoples. Each conqueror left his mark in the region: Egyptians, Persians and Byzantines fertilized the local women and many descendants must still be there. Hence an inhabitant of Hebron is probably much closer in origin to the ancient Jews than the majority of those across the world, who identify themselves as such.
After exhausting all the historical arguments, several critics have seized on genetics. In the 1950's research was carried out in Israel on characteristic Jewish fingerprints, and from the 1970's, biologists in their laboratories (also in the U.S.) have sought a genetic marker common to all Jews. These attempts to justify Zionism through genetics is reminiscent of the procedures of late 19th century anthropologists who very scientifically set out to discover the specific characteristics of Europeans. As of to-day, no study based on anonymous DNA samples has succeeded in identifying a genetic marker specific to Jews, and it is not likely that any study ever will. The bitter irony to see the descendants of the Holocaust survivors set out to find a biological Jewish identity: Hitler would certainly have been very pleased. And it is even all the more repulsive that this kind of research should be conducted in a state that has waged for years a declared policy of "Judaization of the country" in which even to-day a Jew is not allowed to marry a non-Jew.
Source: Shlomo Sands; History Department University of Tel Aviv , Israel

In March 1983 the lifeless bodies of Arthur Koetsler and his wife were found in their London flat. Were they assassinated by agents of Israel's Mossad ?

Footnote: The important racial differences described in Koetsler's book were already fully documented and acknowledged in authoritative reference works, such as the Encyclopedia Judaica. The subject however was suppressed and never became available to the reading public. Koetsler's book "The Thirteenth Tribe" changed all that and the book became a major embarrassment to the Zionists. They were left in a difficult position and were unable to accuse him of anti-Semitism, because Koetsler was a Jew himself.
Go to Googles and enter: "Islamic Jewish Relations". It makes interesting reading, as it shows the very close similarities between Islam and Judaism.


Link to Post 5
Posted by CONTRAVIEWS NEW ZEALAND at 8:01 PM

71. Is war with Iran imminent ? We have recently seen a number of serious developments in the Middle East involving U.S., Israel and the Islamic Republic of Iran. While almost completely ignored by the mainstream western news media, there is considerable alarm around the world and in particular in the Middle East. Some of these developments are unprecedented and could denote as sharp escalation in U.S./Nato and Israeli campaign against Iran, or even all out war. What are these disturbing developments ? On June 18 a U.S. naval carrier group, reportedly accompanied by an Israeli vessel passed through the Red Sea and towards the Persian Gulf. The Harry S. Truman Carrier Strike Force, included an aircraft carrier, guided missile cruiser, destroyers and an German frigate. Israeli air force recently unloaded military equipment at a Saudi Arabia airbase near the city of Tabuk. Even more ominously, the Saudis are reported to have realigned their missile defense system to allow fro an air corridor for Israeli warplanes in the event of a war with Iran. U.S. forces stationed in Azerbaijan have massed along the Iran/Azerbaijan border. There are speculations that if the U.S. and Nato attempts to inspect Iranian ships in order to enforce the new sanctions, the resulting confrontation may lead to war. Fidel Castro has issued a warning of the horrendous catastrophe which could ensue following a U.S./Israeli war against Iran.
See also links to Post 39 and 57
Posted by CONTRAVIEWS NEW ZEALAND at 8:57 PM

70. Lieberman, Israel's far right foreign minister, is contemplating a new plan ("blue print" he calls it) to solve the Israeli/Palestinian conflict. It demands most of the country's large Palestinian minority (majority before they were expelled by the Jews in 1948) to be stripped of citizenship and relocated outside Israel's future borders. He accused many of Israel's 1.3 million Palestinians of acting against Israel and their leaders "actively assisting those who want to destroy the Jewish state. (which had destroyed the Palestinian state in 1948). True peace he claimed can come only when landswaps and exchange of populated territories, creating two largely homogeneous states. Netanyahu's government has all but stopped paying lip service to US sponsored "proximity" talks with the Palestinians following an outrage of global public opinion after Israeli attacks on Gaza 18 months ago and on a Gaza bound flotilla four weeks ago in which nine peace activists were killed. Israel's relations with the international community are likely to deteriorate further later this year when a ten month partial freeze on settlement expansion in the West Bank expires. Other looming diplomatic frustrations for Israel are the return of the Goldstone report to the United Nations, accusing Israel of war crimes in Gaza. However Israel is expected to push ahead with its unilateral policies towards Palestinians and refuse to engage in a meaning full peace process regardless of international repercussions.
Posted by CONTRAVIEWS NEW ZEALAND at 7:22 PM